I. illecebrosus. the northern shortfin squid, is probably the most abundant cephalopod in the western North Atlantic, and is the target of an intensive fishery off northeastern North America. It is also very important as both predator and prey in the continental shelf and slope ecosystems of that area.

I. illecebrosus inhabits inshore waters in summer and retreats to deeper, offshore waters of the continental shelf and slope in autumn and winter. It occurs in temperatures of 0° to 15°C, optimum 7° to 13°C, so it is restricted to northern waters. Spawning grounds and season are unknown, but recent data indicate a late autumn-early winter spawning in offshore slope water near the inshore edge of the Gulf Stream. An inshore summer migration is associated with intensive feeding, primarily on small fishes and euphausiids.

Geographical distribution - Western North Atlantic from 66°N, and Baffin Island, to about 29°N in the Straits of Florida. Records apparently of I. illecebrosus exist from Iceland, southern Greenland and the Mid-Atlantic Ridge but these may be strays from the normal habitat (Roper et al., 1998). 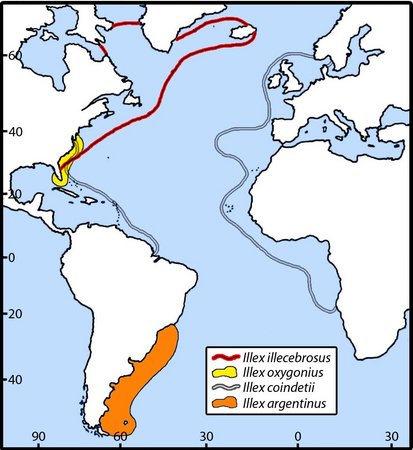 Vertical distribution -  I. illecebrosus is primarily a neritic species of the continental shelf and upper slope. Its vertical range is extensive depending on size, season, and time of day. It has been caught from the surface to about 1 000 m depth; but tends to congregate on or near the bottom during the day and disperse into the water column at night.

Page: Tree of Life Illex illecebrosus (Lesueur 1821). Authored by Michael Vecchione and Richard E. Young. The TEXT of this page is licensed under the Creative Commons Attribution-NonCommercial License - Version 3.0. Note that images and other media featured on this page are each governed by their own license, and they may or may not be available for reuse. Click on an image or a media link to access the media data window, which provides the relevant licensing information. For the general terms and conditions of ToL material reuse and redistribution, please see the Tree of Life Copyright Policies.