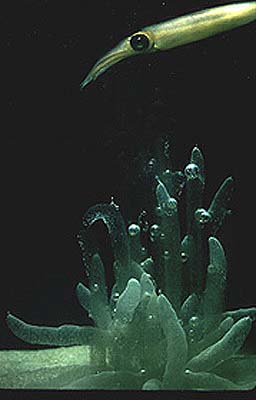 At present the Loliginidae is divided into ten genera with 42 nominal species. The generic affinities of three species currently are not resolved.

The family Loliginidae includes many species that are important in trophic systems, fisheries, and biomedical studies. Brakoniecki (1996) merged the Pickfordiateuthidae with the Loliginidae.

Loliginids are mostly neritic squids (i.e., they occupy waters over the continental shelves). Most are very muscular, "squid-like" in appearance and range in size from about 3 to 100 cm ML. All members of the family have a cornea that covers the lens of each eye. Among decapods, this feature is shared with all members of the Sepioidea but is absent in all oegopsid squids. Loliginids differ from sepioids in having a gladius that extends the full length of the mantle and a gill that (except in Pickfordiateuthis) has a branchial canal.

Characters that Vecchione et al. (1998) agreed were of generic importance within the Loliginidae include:

The morphology of the gladius, as used formerly to distinguish the genus Doryteuthis, is no longer considered to be of generic importance, although it is important at the specific level (see also Alexeyev, 1989). The gladius is quite variable, both within and among species, and could be highly adaptive in response to differences in swimming behavior. Other traditional characters that Vecchione et al. (1998) consider too variable to be of use in the generic systematics of the Loliginidae include spermatophore deposition site, presence of suckers on the buccal lappets, adult chromatophore patterns (e.g. lateral "flame stripes"), and presence of a longitudinal mid-ventral ridge on the mantle.

Although the preliminary generic classification of Vecchione et al. (1998) represented an important step toward consensus on the genera of this family, subsequent analyses of DNA sequences (Anderson 2000) have indicated that a holophyletic classification requires recognician of generic-level species groups defined primarily on distributional characteristics.

"It is of little consequence what characters we select for the distribution of these animals into families and genera, if our arrangement is the most convenient, and exhibits, as near as possible, a graded transition from one to the other."

A consequence of the age of this family and its early inclusion of all squids is that many taxa, both correctly and incorrectly described, have been considered loliginids at one time or another. A summary of this history is found here. Therefore, taxonomic nomenclature in the squid literature can be very confusing.

A thorough nomenclatural review of the family can be found in Sweeney and Vecchione (1998).

A list of all nominal genera and species in the Loliginidae can be found here. The list includes the current status and type species of all genera, and the current status, type repository and type locality of all species and all pertinent references.

The systematics of the myopsid squid family Loliginidae have long been in disorder. In addition to many problems with differentiation of species, loliginid systematics have been hampered throughout the past several decades by the presence of two systems of generic-level classification. The differences between these two systems primarily involved a question of the importance of gladius structure at the generic level. Both systems have been used widely in the scientific literature, although many authors consistently qualified their use by stating that the family was badly in need of revision based upon a worldwide review.

Three separate morphological revisions have been completed (Natsukari, 1984b; Brakoniecki, 1986; Alexeyev, 1991); all concluded that a correct generic-level classification of the family is radically different from either of the previous classifications. Unfortunately, these new classifications also differed substantially from each other, were presented in unpublished dissertations and not widely disseminated, and none has gained full acceptance.

Obviously, the existence of five contrasting systems of classification can cause hopeless confusion to researchers studing these squids, in addition to obfuscating real relationships among the species. Species groupings into subgenera and genera have been based only on similarity. In a workshop publication, Vecchione et al. (1998), recognized six genera. Four of the genera are divided into subgenera: Lolliguncula (Lolliguncula and Loliolopsis); Uroteuthis (Uroteuthis and Photololigo); Loliolus (Loliolus and Nipponololigo); Loligo (Loligo and Alloteuthis). The generic affinities of several species were unresolved.

A follow-up workshop consensus on generic and sub-generic taxonomy of the family was published by Vecchione et al. (2005), based primarily on the phylogenetic research of Anderson (1996; 2000a; 2000b) and Alexeyev (1989; 1991).  Both of those authors built upon the previous workshop proceedings.  The most noteworthy differences in Vecchione et al. (2005) from the classification of Vecchione et al. (1998) include the following: (1) removal of mercatoris from Lolliguncula based primarily on gladius characters, DNA sequence data and biogeography, and recognition of Afrololigo Brakoniecki as a valid genus for this species; (2) elevation of Alloteuthis Wülker from sub-generic to full generic status based on gladius structure and DNA sequence data; (3) removal of American species from the genus Loligo because DNA sequence analyses indicate that Loligo sensu Vecchione et al. is probably paraphyletic. The generic name with priority for the American species is Doryteuthis Naef. This genus further comprises two natural subgroups based on differences in gladius and hectocotylus structure; these subgroups are considered here to be the subgenera Doryteuthis Naef and Amerigo Brakoniecki. Doryteuthis sanpaulensis does not belong in either of these subgenera and is therefore considered to be the sole recognized species in an undescribed subgenus; (4) removal of bleekeri from Loligo and recognition of Heterololigo Natsukari as a valid genus based on DNA sequence analysis; (5) removal of noctiluca from subgenus Uroteuthis of genus Uroteuthis and recognition of Aestuariolus Alexeyev as a valid monotypic subgenus of Uroteuthis primarily because of differences in photophore structure from the rest of the genus.

The egg masses typically are groups of finger-like gelatinous masses containing a few to many eggs each often woven together and always attached to the ocean floor. 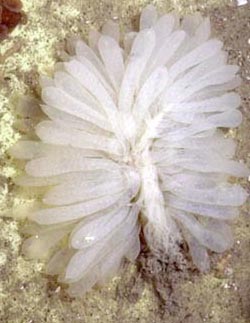 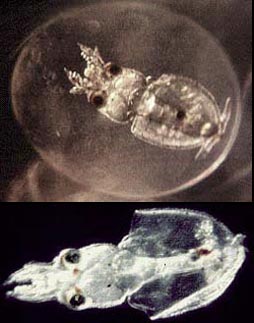 Figure. Left - Side view of an egg mass of a loliginid that has been pulled out of its anchor in the sand, found at low tide off San Felipe, Baja California. Note the root like anchors at the bottom of the picture. Photograph by Mike Lang. Right - Ventral views of a late embryo within the swollen egg chorion, and a recently hatched paralarva of Loligo pealeii. Photographed by Clyde Roper.

Anderson, F.E. 2000a. Phylogeny and Historical Biogeography of the Loliginid Squids (Mollusca: Cephalopoda) Based on Mitochondrial DNA Sequence Data. Molecular Phylogenetics and Evolution 15: 191-214.

Alexeyev, D.O. 1989. Advantages and limitations of using the gladius in diagnosis of species and genera of the family Loliginidae (Cephalopoda). Zoologichesky Zhurnal, 68(6):36-42.

Brakoniecki, T.F. 1986. A Generic Revision of the Family Loliginidae (Cephalopoda; Myopsida) Based Primarily on the Comparative Morphology of the Hectocotylus. Ph.D. Dissertation, University of Miami, Miami, FL, USA. 163 pages.

Lesueur, C.A. 1821. Descriptions of Several New Species of Cuttle-fish. Journal of the Academy of Natural Sciences of Philadelphia, 2(1):86-101.