This family contains a single genus, Mastigoteuthis Verrill, 1881, with 13 nominal species, many of which are poorly known, and a peculiar form, in the M. magna-group, of uncertain status. 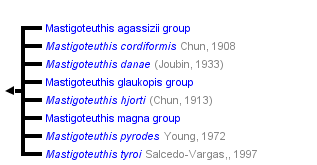 Mastigoteuthids are deep water pelagic or benthopelagic squids that are morphologically distinctive. They are weakly muscled, reddish in color and have elongate fourth arms and whip-like tentacular clubs. Much of the red pigment is not in chromatophore organs but dispersed in other integumental cells, although chromatophores are present. The Mastigoteuthidae, however, is among the most taxonomically confused families of all deep-sea squid due to the fact that many characters are based on the structures (tentacles and skin photophores) often lost during capture.

The whip-like tentacles have tentacular clubs that are little differentiated from the tentacular stalks eventhough they are covered with thousands of minute suckers. In some species, the suckers are so small as to be invisible to the naked eye. The photograph below shows the midregion of a tentacular club with the sucker-bearing portion marked by an X. The arrow points to a microscope enlargment showing the small suckers. Such small suckers, at least in freshly dead specimens, seem to function much like "fly paper" in that anything touching them, whether large or small, sticks. 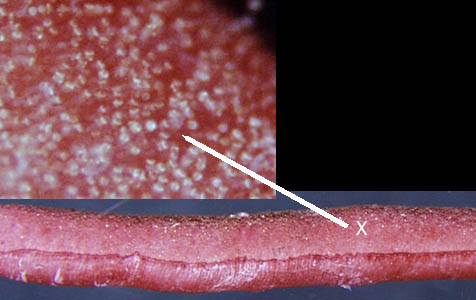 Figure. Side view of a portion of the tentacle club (bottom) of Mastigoteuthis sp A, Hawaiian waters, showing the club covering the top half of the cyclindrical tentacle. Insert - Portion of the club, marked by an "X", as seen through a microscope. Photographs by R. Young.

Histological sections through the tentacle can be seen here.

Fins are usually very large and positioned mostly posterior to the muscular part of the mantle. No well-developed system of giant nerve fibers is present, which reflects the absence of rapid jet propulsion (Dilly, et al., 1977).

Member of the chiroteuthid families ...

Species and species groups in the Mastigoteuthidae

*Funnel pocket (arrow) extends between funnel bridles deep into the head to the cephalic vein. Presence of the pocket can be recognized in the paralarval stage onward (at least in M. famelica). 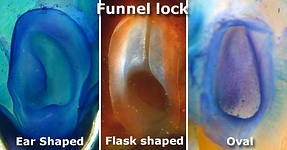 *Integumental photophores are of three types. Those of the M. agassizii-group (below left) and M. pyrodes (below middle) look superficially the same. Those of Mastigoteuthis sp. A (below right, a member of the M. magna-group) are much smaller and very difficult to see (in the photograph they are apparent since most of the covering chromatophore-bearing skin has been lost during capture.

The M. agassizii-, M. glaukopis- and M. magna-groups each contain species that are very closely related. The position of M. pyrodes is uncertain, but it may be closest to the M. agassizii-group and the M. glaukopis-group as they all share a funnel pocket (this feature, however, is probably a pleisiomorphy) and an eyelid photophore. The presence of integumental photophores over much of the ventral surfaces may indicate closer relationship to the M. agassizii-group, but the structure of the photophores has not been examined in M. pyrodes, and they superficially appear to be different from those of the M. agassizii-group. All the above species share long, slender clubs with sucker orifices dominated by pegs on the outer ring and not teeth on the inner ring. M. cordiformis and M. hjorti show many similarities (absence of funnel pocket and skin photophores, relatively short tentacular clubs with large suckers whose orifices are dominated by teeth on the inner rings, large fins, virtuallly identical skin tubercules in adults) and probably have a common ancestor. However these two species are very distinct and not nearly as similar to one another as are those species placed in the three species-groups. Species in the M. magna-group have uncertain relationships based on morphology. They are similar to M. cordiformis and M. hjorti in the absence of a funnel pocket but have tentacles more similar to the other species in the genus.

Molecular data are available for only a few species in the family.  A phylogenetic analysis based on three genes from the four species for which molecular data are available (see tree below) and using a related species, Joubiniteuthis portieri,  as the outgroup yielded a single tree (L= 515, CI= 89, RI= 90) (Young et al. submitted, see below). These limited data suggest that M. hjorti may be the closest relative of the M. magna-group.

The Mastigoteuthidae includes many poorly known species, some described only from paralarvae. This situation and the disagreement in the classification of Salcedo-Vargas (see next section) with that presented here suggest that modifying the classification is premature and should wait until our knowledge has increased to the point where a full phylogenetic study can be made. We recognize, therefore, only the single genus Mastigoteuthis.

Details on the squid that provided the molecular data can be found here.

Idioteuthis Sasaki, 1916???? Mastigoteuthis Verrill, 1881 *Salcedo-Vargas indicated that these species need to be re-evaluated.

The recognition of some species and the above alignment of species differs considerably from that presented here.

A list of all nominal genera and species in the Mastigoteuthidae can be found here. The list includes the current status and type species of all genera, and the current status, type repository and type locality of all species and all pertinent references.

Two species (M. hjorti, M. magna) have been observed from submersibles drifting just above the ocean floor with tentacles dangling within a few mm of the bottom, presumably, to capture copepods and other small plankters of the epibenthic zooplankton (Roper and Vecchione, 1997). The tentacles extend from the tips of the ventral arms (arms IV) from where they reside in the tentacular sheaths (i. e., between the arms and their lateral membranes).  The tentacles are typically held apart by the ventral arms (the "tuning fork" posture) so they "fish" independently of each other (Roper and Vecchione, 1997).  AVI and MPEG formated video clips of this behavior is available at Cephalopods in Action. 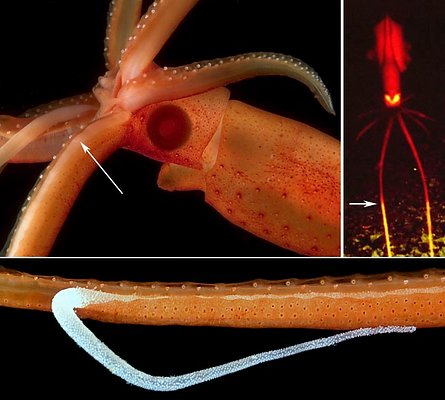 Figure.  Left top - Side view of the head and brachial crown of M. agassizii. Arrow points to the tentacle base neatly enveloped by the lateral membrane of arm IV. Photograph by David Shale. Right top - Ventral view of Mastigoteuthis sp. hanging in the water just above the ocean floor, submersible photograph, Hawaiian waters. The arrow points to the place where the tentacle emerges from the tentacular sheath of the left arm IV. Photograph modified from Young, et al. (1999), courtesy of the Hawaii Undersea Research Laboratory. Bottom - Dorsal view of a portion of a ventral arm (arm IV) of M. agassizii with the tentacle (white) mostly hidden within the tentacular sheath. The entire length of the tentacle apparently can be held within the tentacular sheath. Photograph by David Shale. Views of M. agassizii were photographed in a shipboard aquarium by David Shale on an NSF cruise with Marsh Youngbluth, Harbor Branch Oceanographic Institution, N.E. Atlantic waters. The brilliant red color in both images has been reduced in Photoshop to accentuate detail. ©