The Mastigoteuthis agassizii species-group occurs throughout much of the Atlantic, Indian and Pacific Oceans. At present we are confident of the separate species status of only two species: M. agassizii and M. psychrophila. However, character variation through the wide range of the group is apparent (see Comments) and we suspect that eventually more species will prove to be valid.

Integumental photophores are found in at least four species, but their morphology has only been studied in M. agassizii. The photophore has a large covering chromatophore that lies beneath vacuolated cells, a thick donut-shaped cup of photocytes and a central cord of cells that passes through the hole in the photocyte donut to the chromatophore. 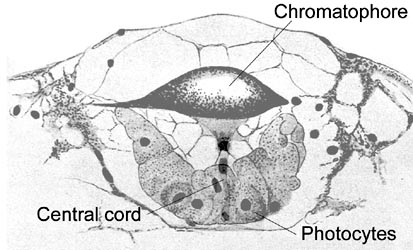 The integumental phototophores of the M. agassizii-group appear superficially to be very similar to those of M. pyrodes. However, the vacuolated cells above the covering chromatophore in M. agassizii give the impression that the photophore is sunken into the skin. M. pyrodes also differs in lacking the ringed chromatophores and white spheres and has much more abundant chromatophores.

Outer rings of club suckers have a complete whorl of pegs with lateral pegs enlarged in some species. The presence and size of enlarged lateral pegs depends on the absolute size of the sucker. Sucker size, howsever can vary with age and sucker position on the club. Smaller suckers are found proximally, distally at extreme tip and marginally on the club. Generally, the lateral pegs become enlarged at a sucker diameter of about 0.15 mm. Therefore if a large squid (ca. 80 mm ML or more) does not develop suckers of this size or larger, as in M. psychrophila, enlarged lateral pegs will not occur. This character is very important but is only useful in large squid. 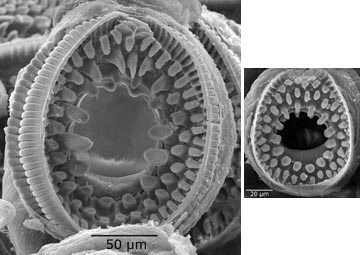 M. psychrophila is most easily distinguished from other members of the M. agassizii group by the arm IV photophore patterns (multiple irregular series vs two series), the differences in tentacle sucker dentition in large specimens (no enlarged pegs vs enlarged lateral pegs) and a slightly more pronounced antitragus in the funnel locking-apparatus. Of the remaining species, we recognize two of the five forms that have been described as separate species. These two, M. agassizii (temperate South Atlantic to boreal N. Atlantic) and M. dentata (tropical to temperate IndoPacific) are distinguished primarily by their geographic distribution. We compare the three species here:

We have placed three species, M. flammea,  M. grimaldii and M. schmidti, in synonymy with M. agassizii. See the M. agassizii page for more information on these species.