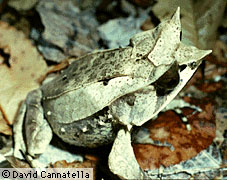 Megophryids are the largest and most diverse family-level group of non-neobatrachian frogs. They are found in India, Pakistan, and eastward into southeast Asia, Borneo and the Philippines to the Sunda Islands. They range in size from about 20 to 125 mm. Some are large, cryptic, forest-floor dwellers with adaptations for large prey. Their skin is modified so that they resemble dead leaves on the forest floor. Some species have points of skin on the eyelids, which further enhances the illusion (Megophrys montana). Others, such as Leptobrachella mjobergi, are small, with digital discs and are found on rocks along streams. Some megophryids have pond-type tadpoles; others have stream-dwelling tadpoles, some with surface-feeding mouths and some with large buccal areas for clinging to rocks. All megophryids for which data are available have unusually ossified intervertebral disks, and hyoid plates that lack most of the ceratohyals. There are no known fossils.

The distribution of living members of the family Megophryidae is indicated in red.

Ford and Cannatella (1993) defined the node-based name Megophryidae to be the common ancestor of living megophryines (Atympanophrys, Brachytarsophrys, Leptobrachella, Leptobrachium, Leptolalax, Megophrys, and Scutiger), and all its descendants. Putative synapomorphies include the complete or almost complete absence of ceratohyals in adults, intervertebral cartilages with an ossified center, and paddle-shaped tongue (Regal and Gans, 1976). Only two of the seven genera were analyzed by Cannatella (1985), but ongoing studies of other taxa by Cannatella corroborate these synapomorphies. The monophyly of megophryids has not been questioned.