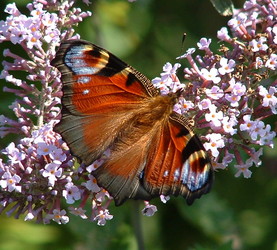 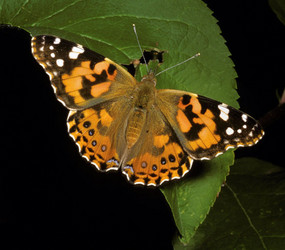 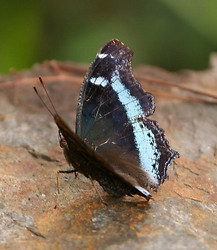 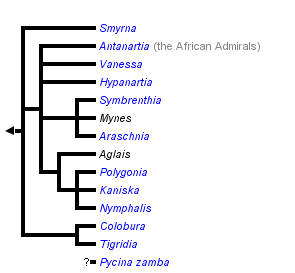 close box
The phylogeny above shows all the stable and robust clades in Nymphalini from Wahlberg et al. (2005).

Nymphalini contains about 100 species, many of which are well-known by everybody, such as the Red Admiral (Vanessa atalanta), the Painted Lady (Vanessa cardui) and the Tortoiseshells (Aglais). Species in temperate regions tend to hibernate as adults, and are thus among the first butterflies to be seen in Spring. The group has been the subject of intensive ecological and evolutionary studies, especially the genus Polygonia. Species of Nymphalini are found through out the world.

The phylogenetic relationships of Nymphalini have been studied intensively since 2000, although the emphasis has been on the Nymphalis-group (including Nymphalis, Kaniska, Polygonia and Aglais). The most comprehensive study so far has been done by Wahlberg et al. (2005), who included 46 species from almost all genera (the putative Nymphalini Pycina was not included). Wahlberg et al. (2005) showed that the genera Colobura, Tigridia and Smyrna should be included in the tribe Nymphalini (they were previously placed in Coeini). Colobura and Tigridia are clearly sister genera and together they are sister to the rest of Nymphalini. The position of Smyrna is not clear at the moment, it may be sister to the rest of Nymphalini (to the exclusion of Colobura and Tirgridia; Wahlberg et al. 2005) or it may be sister to Colobura , Tigridia (Wahlberg 2006). The remaining genera form a strongly supported monophyletic group based on the DNA sequences of three genes (Wahlberg et al. 2005). Within this group, Symbrenthia, Mynes and Araschnia form a monophyletic group, but the relationships of these three genera are not clear at the moment (Fric et al. 2004, Wahlberg et al. 2005), with Fric et al. (2004) suggesting that Mynes is within Symbrenthia, while Wahlberg et al. (2005) place Mynes as sister to Araschnia. The lack of resolution is possibly due to the quick divergence of the ancestor into three lineages (Wahlberg 2006).

The relationships of the Nymphalis-group genera have been the focus of several studies (Nylin et al. 2001, Wahlberg and Nylin 2003, Weingartner et al. 2006). It is clear that the genus Aglais is sister to the other genera, with strong support from both molecules and morphology. The position of Kaniska is not clear, with molecules placing it as sister to Nymphalis with weak support and morphology placing it as sister to Polygonia, also with weak support. Kaniska was synonymized with Polygonia by Wahlberg and Nylin (2003), however, the unclear position of Kaniska suggests that it should be retained as a genus of its own, despite having just a single species in it.

Wahlberg, N. 2006. That awkward age for butterflies: insights from the age of the butterfly subfamily Nymphalinae. Systematic Biology 55:703-714.

Page: Tree of Life Nymphalini Rafinesque 1815. Authored by Niklas Wahlberg and Andrew V. Z. Brower. The TEXT of this page is licensed under the Creative Commons Attribution License - Version 3.0. Note that images and other media featured on this page are each governed by their own license, and they may or may not be available for reuse. Click on an image or a media link to access the media data window, which provides the relevant licensing information. For the general terms and conditions of ToL material reuse and redistribution, please see the Tree of Life Copyright Policies.