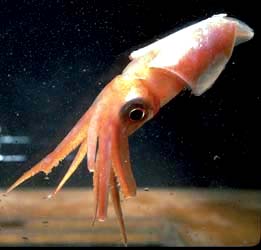 On one occasion an arm was cut off a moribund O. neilseni that was being observed in seawater in a pan. The portion of the arm that was separated from the squid immediately began to wiggle violently while the arm tip photophore flashed brilliantly. On one occasion an arm tip was found in the bottom of a shipboard tank that held a living O. neilseni. Each of these squid qenerally are retrieved from the trawl without several arm tips of differing length, and occasionally a specimen is captured with an arm tip in the process of regeneration. This evidence suggests that the arm tips can either be autotomized or are easily broken by an attacking predator and that the detached, flashing and wiggling arm tip acts as a lure to detract the predator,similar to the function served by the autotomized tail of a terrestrial lizard.