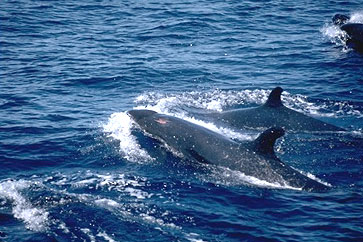 The highly-derived morphology of their skull (related to the development of the spermaceti organ) leads to important difficulties in the establishment of the polarity of some characters. Some molecular studies based on mitochondrial DNA sequences (Milinkovitch et al. 1993; Milinkovitch et al. 1994) suggest that Physeteroidea are more closely related to mysticetes than they are to other odontocetes. However, other molecular data (e.g., Nikaido et al. 1999; Gatesy et al. 1999) support the monophyly of toothed whales (Odontoceti). Recent analyses (Cassens et al. 2000) indicate that there is conflicting signal between the nuclear DNA and mitochondrial DNA data. Whether this conflict is due to differential lineage sorting or to misleading signal from one or several data set(s) remains to be investigated.

Furthermore, the monophyly of toothed whales is supported by derived morphological character states such as: maxillae covering the supraorbital region, single blowhole, development of a melon, development of proximal sacs (Heyning, 1989), most of the lateral side of the periotic detached from the squamosal except for a small area near the hiatus epitympanicus (Luo and Gingerich, 1999). A sister-group relationship between sperm and baleen whale would prompt reappraisal of morphological transformations in cetaceans (Milinkovitch, 1995).

Note that some morphological analyses have placed the Physeteroidea as the sister-group to the Ziphiidae in a clade Physeterida characterized by (among others):

The special case of the so-called "river dolphins"

While most of the 83 recognized extant species of cetaceans are exclusively marine, several species live sporadically or exclusively in fresh water. Some of them (e.g., beluga, Tucuxi, Irrawaddy dolphin, finless porpoise) are well characterized phylogenetically, i.e., they belong to the superfamily Delphinoidea (see, e.g., Heyning, 1989; LeDuc et al., 1999). On the other hand, the taxonomic relationships of the so-called "river dolphins" have been in a state of confusion for more than a century. These include three exclusively riverine species:

The fourth species classified as a "river dolphin" is the La Plata dolphin, or "franciscana" (Pontoporia blainvillei). It is found not only in estuaries but also in coastal waters of eastern South America from 19°S (Brazil) to 42°S (Argentina).

All "river dolphins" show a peculiar morphology with a characteristic long and narrow rostrum, a low triangular dorsal fin, broad and visibly fingered flippers, and a flexible neck. Their eyes have also been reduced to various degrees (Pilleri 1974; the susu even lacks eye lenses and is virtually blind) while echolocation abilities seem more refined than in other cetaceans. In addition, shared skull characters led most authors to classify them into a monophyletic group, either in the family Platanistidae or in the superfamily Platanistoidea (sensu lato, Flower 1869; Cozzuol 1985). However, these diagnosing characters could be ancestral (Rice 1998; Messenger 1994), hence phylogenetically uninformative, or prone to convergence (because adaptive to living in turbid waters). While the monophyly of the group was usually not questioned, many morphological analyses emphasized the substantial divergence among the four species (e.g., Kasuya 1973; Zhou et al. 1979), and this eventually led to the classification of the four genera in four monotypic families (Pilleri 1980; Zhou 1982).

Morphological idiosyncrasies as well as the separation of the four species on three subcontinents have created taxonomic disagreement among morphologists with continuing debate regarding the reality of a river dolphin clade and the position(s) of “river dolphins” within the phylogeny of whales. Gray (1863) first challenged the monophyly of "river dolphins" and was followed by other authors who included the fransiscana within delphinids (Kellogg 1928; Miller 1923). Only recently, morphologists revisited Gray's hypothesis. Heyning (1989) recognized a clade including the boto, fransiscana, and baiji . On the other hand, de Muizon (1985;1994), as well as Messenger and McGuire (1998), defined the Delphinida clade, grouping the baiji with the monophyletic [boto , fransiscana , Delphinoidea]. Morphological characters supporting the Delphinida are:

Phylogenetic analyses of nucleotide sequences (from mitochondrial and nuclear genes) confirmed that extant river dolphins are not monophyletic (Cassens et al. 2000; Hamilton et al. 2001) and suggest that they are relict species whose adaptation to riverine habitats incidentally ensured their survival against major environmental changes in the marine ecosystem or the emergence of Delphinidae (Cassens et al. 2000). This work (Cassens et al. 2000) based on nucleotide sequence analyses (cytochrome b, partial 12S rDNA and partial 16S rDNA) and others (Nikaido et al. 2001) based on the analysis of SINE retropositions also support the monophyly of Delphinida.

The restricted family Platanistidae (including the extant Platanista and several Miocene marine relatives) is placed in recent molecular studies as the sister-group of Delphinida , Ziphiidae (Cassens et al. 2000; Hamilton et al. 2001), a result which is not consistent with the main recent morphological studies, that maintain the superfamily Platanistoidea (including Platanistidae and two fossil families Squalodontidae and Squalodelphinidae) as sister-group of the Delphinida , Eurhinodelphinoidea (Muizon 1991) or as sister-group of all the extant odontocete families, including the Physeteroidea (Fordyce 1994).

Discussion of some problematic extinct groups

Several fossil groups of odontocetes (e.g., Agorophiidae, Squalodontidae, Eurhinodelphinidae, and Kentriodontidae) are still taxonomically problematic; it is very likely that some of them form paraphyletic groups.

Dawson, S. D. 1996a. A description of the skull and postcrania of Hadrodelphis calvertense Kellogg 1966, and its position within the Kentriodontidae (Cetacea; Delphinoidea). Journal of Vertebrate Paleontology 16 (1): 125-134.

Kasuya, T. 1973. Systematic consideration of recent toothed whales based on the morphology of tympano-periotic bone. Scientific Reports of the Whales Research Institute, Tokyo 25: 1-103.

Lambert, O., 2005b. Phylogenetic affinities of the long-snouted dolphin Eurhinodelphis (Cetacea, Odontoceti) from the Miocene of Antwerp. Palaeontology, 48 (3): 653-679.

Milinkovitch, M. C., A. Meyer, and J. R. Powell. 1994. Phylogeny of all major groups of cetaceans based on DNA sequences from three mitochondrial genes. Molecular Biology and Evolution 11:939-948.

Correspondence regarding this page should be directed to Michel C. Milinkovitch at