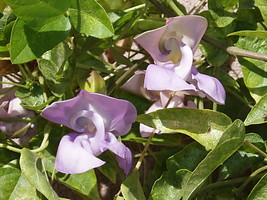 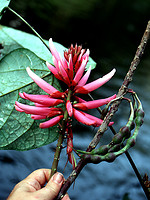 Papilionoideae (the "papilionoids"), the largest of the three subfamilies of Fabaceae with 476 genera and 13,860 species, is also the most diverse and widely distributed, and includes most of the familiar domesticated food and forage crops and model genetic/genomic species (Gepts et al., 2005).

Papilionoideae is characterized by pentamerous, zygomorphic papilionoid (pea-like) flowers that have differentiated an adaxial petal (banner or standard) that is external to the others in bud, and abaxial and lateral pairs of petals (keel and wings, respectively), with the keel petals fused to enclose the stamens and gynoecium. Although this floral architecture is ubiquitous in the subfamily, exceptions do occur, with nearly actinomorphic flowers (e.g., Cadia in tribe Sophoreae; Inocarpus in tribe Dalbergieae) and flowers lacking 1 or more of the five petals known from several groups (e.g., tribe Amorpheae).

Unlike the other subfamilies, many papilionoids have the ability to synthesize quinolizidine alkaloids, isoflavones, and non-protein amino acids such as canavanine, while bipinnate leaves, complex leaf glands and compound pollen grains are lacking (Polhill, 1994).

Although the majority of tribes are still defined in a more traditional sense (e.g. Polhill, 1994) the results of phylogenetic studies from the last 10 years necessitate quite radical shifts in inter- and intra-tribal relationships within the subfamily, and these insights have profound implications with regard to papilionoid evolution.

Papilionoideae has been consistently resolved (and strongly supported) as monophyletic in analyses of molecular data (e.g., Doyle et al., 1997, 2000; Pennington et al., 2001; Wojciechowski et al., 2004), but on morphological criteria the uncertainty regarding the position of papilionoid tribes such as Swartzieae, long considered 'transitional' between Caesalpinioideae and Papilionoideae, has clouded this issue. Rather than being resolved as the sister group to an isolated caesalpinioid lineage(s), as are the mimosoids, papilionoids are sister to the large clade comprised of Caesalpinieae sens. lat., Cassieae sens. strict., and Mimosoideae in the legume phylogeny (Wojciechowski et al., 2004). Although papilionoids have been considered to contain most of the "derived" groups within the family (e.g., predominantly herbaceous groups), fossil evidence and divergence time estimates clearly indicate the oldest crown clades within papilionoids are comparable in age (39 to 59 Ma) to the oldest caesalpinioid diversifications (Lavin et al., 2005).

Wojciechowski, M. F., M. Lavin, and M. J. Sanderson. 2004. A phylogeny of legumes (Leguminosae) based on analysis of the plastid matK gene resolves many well-supported subclades within the family. American Journal of Botany 91: 1846-1862.

Correspondence regarding this page should be directed to Martin F. Wojciechowski at