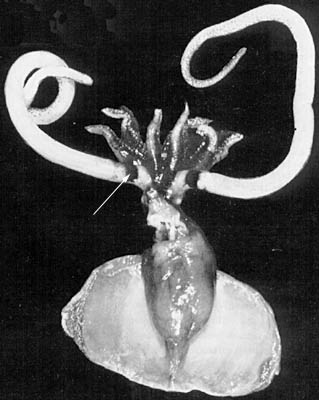 The following five species are known in the family but only one has been named.
Containing group: Chiroteuthid families

The members of the Promachoteuthidae are mostly small, weakly muscled squids that seem to occur exclusively in the great depths of the bathypelagic zone of the world's oceans. Species of Promachoteuthis are known from only 12 specimens (two have not been described in the literature - Voss, 1992) among five, mostly geographically restricted, species. Although the data are few, the apparent high diversity and restricted distributions are unexpected for cephalopods inhabiting the bathypelagic region of the world's oceans. Maximum size recorded is a 184 mm ML mature male (Voss, 1992) but this specimen has not been described. A distinctive feature is the reduction in the size of the eyes which is exteme in Promachoteuthis sp. B. This species has the smallest eyes (relative to the squid size) of all squids and their eyes are burried in gelatinous tissues of the head but retain contact with sea water via slender canals. Little is known of the biology of these rare squids.

A member off the chiroteuthid families ...

The variable appearance of the gladius among species is presumably due to the reduction in size (usually it is well less than the mantle length) and function. Most species can quickly be recognized as a member of this family by the very thick tentacles and small eyes.

A list of all nominal genera and species in the Promachoteuthidae can be found here. The list includes the current status and type species of all genera, and the current status, type repository and type locality of all species and all pertinent references.

Roper, C. F. E. and R. E. Young. 1968. The family Promachoteuthidae (Cephalopoda: Oegopsida). I. A re-evaluation of its systematic position based on new material from Antarctic and adjacent waters. Ant. Res. Ser. 11: 203-214.