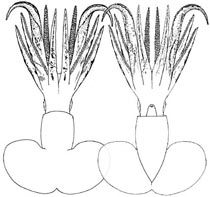 Promachoteuthis sp. A is known from two specimens: the smaller holotype, an immature female 58 mm ML and a paratype, an immature female, 102 mm ML. The paratype was captured by the R/V WALTER HERWIG in 1973 while the holotype was captured by the R/V G.O. SARS in 2004 and was in near-perfect condition. Both were taken from the North Atlantic in nets that fished to depths greater than 2,000 m. Virtually nothing is known of their biology.

Figure. Oral view of the midregion of a lateral arm of Promachoteuthis sp. A, holotype, preserved.

Figure. Lateral views of the tentacles of Promachoteuthis sp. A, holotype, preserved. Note the long papillae that extend from the proximal regions of the tentacles. Arrows point to pigmented ridges. Photograph by R. Young

Figure. Side views of the head of Promachoteuthis sp. A, holotype. Left - Preserved squid. Left arrow points to edge of iris; right arrow points to slit which is the collapsed opening of the eyelid. Right - Unpreserved squid. Eyelid opening a small, dark oval pore; iris visible but difficult to discern; whitish, oval ring that passes by the eyeopening appears to define a slightly less opaque (i.e. clearer) region of the eyelid but it is difficult to distinguish in the photograph on the left. Photographs by R. Young.

More information on the description can be found here.

Promachoteuthis sp. A is very distinctive and easily separated from other members of the genus by the peculiar tentacles among many other features.