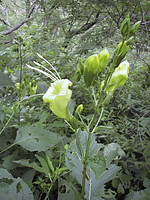 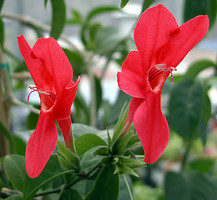 Ruellia is a large genus of ca. 300 species. Mexico and Brazil are centers of diversity, but the genus is common elsewhere throughout the neotropics, Madagascar, mainland Africa. A few species also occur in southeast Asia, Australia, and temperate regions of North America and South America.

Recent molecular work (E. Tripp, MS in prep.) suggests Ruellia is probably monophyletic, but early diverging lineages are poorly resolved, and a small number of related genera will need to be transferred to Ruellia. Floral morphology is diverse within Ruellia. Putatitve pollination syndromes (e.g. bee, hummingbird, bat, hawkmoth) have evolved multiple times suggesting that pollinators have surely played an important role in the overall diversification of the genus. Pollen morphology (3-porate, spheroidal, coarsely reticulate) represents perhaps the best-known synapomorphy for the genus. Also, a haploid chromosome count of x = 17 has been found for nearly all Ruellia species to date.

Species of Ruellia can be found in a wide variety of habitats including understory rainforest, desert, swamp, tropical montane, and temperate grassland environments. Most are herbaceous but some are shrubs, small trees, or lianas. A majority of Ruellia species produce cleistogamous flowers in addition to open flowers. Ruellia seeds, like other Ruellieae, are covered by hygroscopic trichomes that become mucilaginous when wet. These traits aid in successful reproduction and dispersal, and probably help explain the widespread distribution of the genus. Several species of Ruellia are ornamentals, and others have been noted for their local, medicinal uses.

Correspondence regarding this page should be directed to Erin Tripp at