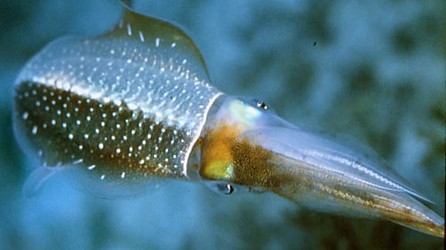 Sepioteuthis is distinctive; unlike in many loliginid genera, controversy does not exists over which species should be included (Vecchione et al., 1998). These loliginids have a rather broad, posteriorly rounded mantle and fins that extend nearly the full length of the mantle. This gives them a Sepia-like appearance. They also lay eggs that are much larger than those of other loliginids. They usually are found in shallow tropical or subtropical regions.

Because of their association with coral reefs, the common name for these species is "reef squids". The distribution of the genus generally follows that of coral reefs, warm, clear, tropical and subtropical waters, but coral reefs are not a habitat requirement for all of these squids. For example, S. lessoniana is common around the southern part of Honshu and Kyushu in Japan, but is not associated with coral reefs in those areas. There is one species, S. sepioidea, in the western Atlantic; the remaining species are found in Indo-West Pacific waters.