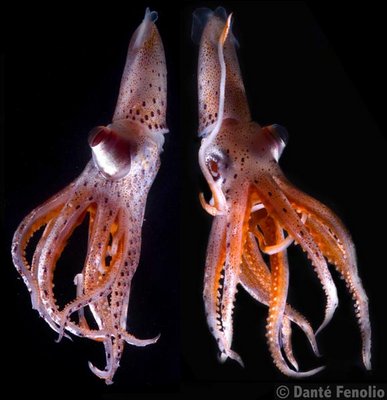 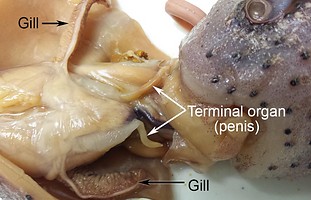 Figure. Ventral view of the viscera of a preserved, mature male S. arcturi seen by cutting and spreading the mantle. Note the paired penes with the right (i.e., upper) one carrying spermatophores. Photograph by M. Vecchione.

Species of Stigmatoteuthis are easily recognized by the Type 1a photophore pattern of the head which has 3 photophores in the Midline Series and no rogue photophore (see pattern of S. hoylei). S. arcturi can be most easily separated from S. dofleini by the complex looping found in the ejaculatory apparatus of the spermatophore and details of the hectocotylus. It is most easily separated from S. hoylei by the shorter sperm mass in the spermatophore. If mature males are not available, separation is based on capture location.

In this clade of histioteuthids with bilaterally paired male secondary sexual organs, the first species described was Histiopsis hoylei Goodrich 1896. However, the type species of the nominal genus Histiopsis is H. atlantica, which has unpaired male organs and Histiopsis was subsequently placed in the synonomy of Histioteuthis (Voss,1969). Pfeffer  (1900) described the genus Stigmatoteuthis, with type species S. hoylei (Goodrich 1896) by monotypy. (This is not the same species as Meleagroteuthis hoylei Pfeffer, 1900 which, according to Nesis, 1987, is a synonym of Histioteuthis meleagroteuthis.) Therefore Stigmatoteuthis Pfeffer 1900 is the valid-genus name designated for a species in this clade.

The distribution of S. arcturi extends throughout the tropical and subtropical Atlantic between about 40°N and 30°S (Voss, et al, 1998). 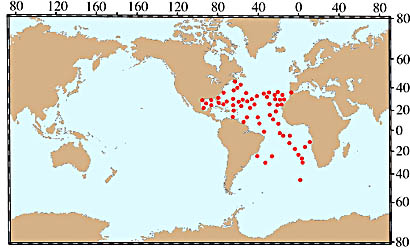 Page: Tree of Life Stigmatoteuthis arcturi Robson, 1948. Authored by Richard E. Young and Michael Vecchione. The TEXT of this page is licensed under the Creative Commons Attribution-NonCommercial License - Version 3.0. Note that images and other media featured on this page are each governed by their own license, and they may or may not be available for reuse. Click on an image or a media link to access the media data window, which provides the relevant licensing information. For the general terms and conditions of ToL material reuse and redistribution, please see the Tree of Life Copyright Policies.