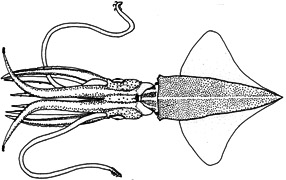 A. gilchristi is a circum-southern transition species that inhabits waters between 20° - 45° S.

Alexeyev (1994) reported the highest abundance and frequency of this species between 40° - 45° S in central southern Pacific.

In the central South Pacific, the squids caught in April of 1987 were all immature. In July, stage I of maturity was already absent, while individuals at III and IV stages made up 86% of females and 87% of males. In September, the majority of squids were mature or spent (Alexeyev, 1994).

This species feeds on crustaceans, mainly copepods, and to a lesser extent on euphausiids and hyperiids (Alexeyev, 1994).

A. gilchristi is distributed in circum-southern temperate waters between 20° - 45° S, but is not known from the southern coast of Australia (Riddell, 1985; Alexeyev, 1994). This species is abundant at the southern border of the Subantarctic frontal zone in the central South Pacific (Alexeyev, 1994) Alexeyev classified this as "peripheral notalian species"