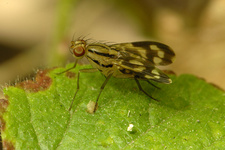 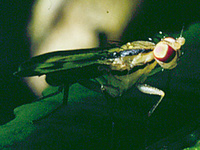 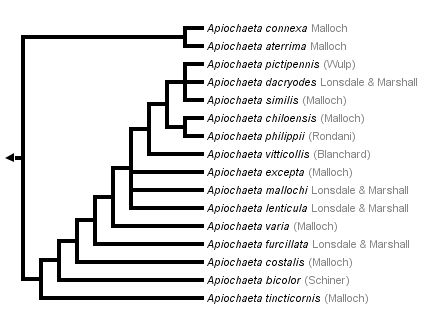 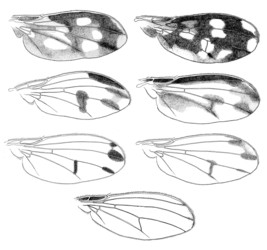 The only Clusiidae endemic to temperate South America is the genus Apiochaeta Czerny, a relatively large, yellow group of flies that is often ornamented with stripes and spots on the thorax and wings. The only other clusiids found in this region are a few widespread neotropical species of the clusiodine genera Craspedochaeta Czerny and Heteromeringia Czerny.

The 16 species of this genus were revised by Lonsdale & Marshall (2008), who redefined the genus to include all of those species previously treated as Alloclusia Hendel, which is now considered to be a junior synonym of the senior Apiochaeta. The Chilean fauna was previously treated by Malloch in 1933, who described most of the species in the genus.

Apiochaeta is a distinct, large-bodied genus of flies that can be readily diagnosed by three dorsocentral bristles, an angulate cell dm, an elongate curved distiphallus with one pair of lateral spinulose projections, and a ventral receptacle with numerous transverse wrinkles and two ventral longitudinal furrows (Lonsdale & Marshall, 2008).  One pair of sister-species including Apiochaeta aequalis Malloch is characterized by a broad head, inset posterior fronto-orbital bristles and usually white notal patches; most other species like Apiochaeta pictipennis (Wulp) are large, pale, strongly striped, and often with elaborately patterned wings.

Like other Clusiinae, Apiochaeta also has an inclinate anterior fronto-orbital bristle, a small ratio of the length of the ultimate section of vein M to the penultimate, a subnotal stripe, a dorsal preapical bristle on the mid tibia, outstanding bristles on the posterodorsal surface of the fore femur, a bent or jointed distiphallus, and a posteromedial truncated notch on the vertex (Lonsdale & Marshall, 2006).

Apiochaeta, like the Holarctic and Oriental Clusia Haliday, 1839, has an inclinate anterior fronto-orbital bristle, a presutural intra-alar bristle, an M1,2 ratio less than 2.5 (3.0 in A. bicolor (Schiner)), a fore femur with several outstanding posterodorsal bristles, three rows of ventral ctenidial bristles on the male fore and mid femora (one anterior, two posterior), a subnotal stripe, an elongate and medially bent distiphallus and a truncate notch on the posterior margin of the frons behind the ocelli.

The genus also has similarities to other taxa endemic to the Neotropics, however, and unpublished molecular evidence strongly supports its placement in the Sobarocephalinae:

Apiochaeta is also similar to Sobarocephala Czerny, 1903 and Chaetoclusia Coquillett, 1904 (which are also found in South America but do not occur in the southern temperate region) in that it has a dorsal preapical bristle on the mid tibia, a surstylus that is at least half as long as the epandrium and an enlarged ventrolateral hypandrial lobe. It differs from all of these genera, however, in that it has three pairs of well-developed dorsocentral bristles, an oblique vein dm-cu, one pair of elongate spinulose lobes fused to the base of the distiphallus, and a ventral receptacle with numerous transverse wrinkles and two ventral longitudinal furrows (Lonsdale & Marshall, 2008).

Page: Tree of Life Apiochaeta. Authored by Owen Lonsdale and Steve Marshall. The TEXT of this page is licensed under the Creative Commons Attribution-NonCommercial License - Version 3.0. Note that images and other media featured on this page are each governed by their own license, and they may or may not be available for reuse. Click on an image or a media link to access the media data window, which provides the relevant licensing information. For the general terms and conditions of ToL material reuse and redistribution, please see the Tree of Life Copyright Policies.