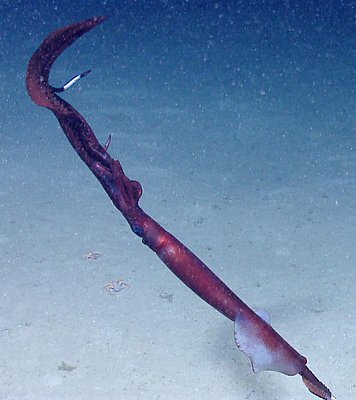 Little is known obout the biology of any species of Asperoteuthis. The most peculiar feature of this genus is the structure of the tentacular clubs. The distal half of the club has typical suckers and suggests that this part of the club functions in the usual capture of prey. The function of the bare proximal half of the club with its broad protective membranes is less clear but relates to another problem: How can the long and extremely slender tentacles, which in A. acanthoderma can be 7-12 times the mantle length (Tsuchiya and Okutani, 1993), be deployed? Perhaps the wide protective membranes of the proximal region of the club, which are composed virtually entirely of muscular trabeculae, function as muscular fins that swim the club into position.

These squid generally lose the tentacles during capture and can easily be confused with Grimalditeuthis. However the lack of a fused funnel-mantle locking apparatus easily distinguishes them.

Nothing is known of the phylogenetic relationships among the species.

Page: Tree of Life Asperoteuthis Nesis, 1980. Authored by Richard E. Young and Clyde F. E. Roper. The TEXT of this page is licensed under the Creative Commons Attribution-NonCommercial License - Version 3.0. Note that images and other media featured on this page are each governed by their own license, and they may or may not be available for reuse. Click on an image or a media link to access the media data window, which provides the relevant licensing information. For the general terms and conditions of ToL material reuse and redistribution, please see the Tree of Life Copyright Policies.