Asperoteuthis sp. A Young and Roper 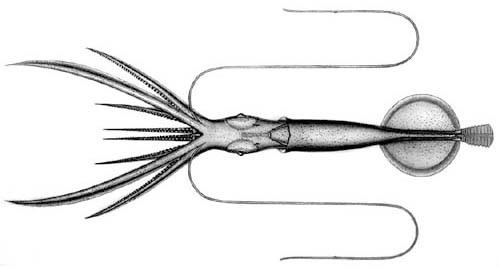 Asperoteuthis sp. A is very gelatinous, with about the same consistency as Grimalditeuthis bonplandi. It has elongate ventral arms in small squid, but these get relatively short in large squid. It lacks the tubercles and elongate fins of A. acanthoderma.

Asperoteuthis sp. A apparently possesses a large secondary tail but a specimen with an attached tail has not been captured.

Figure. The drawing is a reconstruction based on the collection of a damaged tail in the same tow with a small (80 mm ML) Asperoteuthis sp.A. The tail did not match the broken end of the gladius from the specimen indicating that a piece of the tail was missing. Tentacular clubs missing from specimen, added to drawing. Drawing by A. Hart.

Very few Asperoteuthis sp A have been captured with the clubs attached as the long, thin tentacles are easily broken off during capture. With tentacles missing, it can be confused with Grimalditeuthis bomplandi in its general shape and consistency. However, many differences easily separate them including presence of the funnel-mantle fusion and three large papillae on each arm-sucker base in G. bomplandi.

In addition to the features listed in the Diagnosis, Asperoteuthis sp. A differs from A. acanthoderma in (1) the weaker consistency of the arms and mantle, (2) the dentition of the arm (6-10 vs 3-4) and club (25 vs 9 teeth) suckers, (3) the smaller and more circular terminal club photophore, (4) the longer terminal papilla on the club and (5) the broader fins (width ca 115% of length vs ca 75% of length). In addition, the club suckers of A. acanthoderma are on shorter stalks, the sucker rings are more elongated in the oral-aboal directiion and suckers of arms IV are more densely packed. 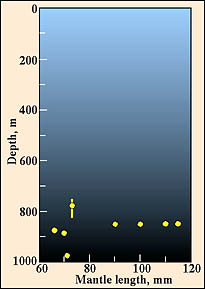 Type locality: Hawaiian waters at 21°25'N, 158°20.5'W. The holotype was captured in an opening-closing trawl between 820 and 870 m depth during the day (1411-1616 hrs). This species is known only from the waters off the Hawaiian Islands. Both Asperoteuthis sp. A and Asperoteuthis acanthoderma occur in these waters but Asperoteuthis. sp. A is much more abundant.