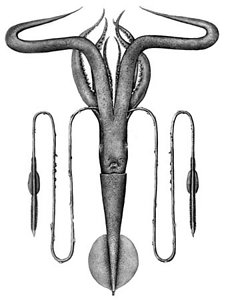 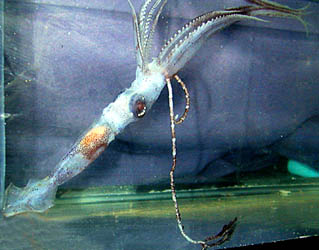 Chiroteuthis spoeli is a broadly distributed species that is similar to  Chiroteuthis joubini and Chiroteuthis sp. B2 in the three-part division of the club protective membranes. It is closest to C. sp. B2 but is most easily separated by the arm sucker size and dentition.

Chiroteuthis spoeli exhibits considerable variation in the size of the globular suckers and the degree of restriction of the sucker aperature. Also considerable variation exists in the number of trabeculae in the proximal portion of the club. Because of this large variation, the possibility exists that C. spoeli is a species complex. There seems to be intergrades between Chiroteuthis spoeli and Chiroteuthis B2 (e.g. see SEMs of arm suckers for Chiroteuthis B2) and these forms may not represent separate species. We have not examined many Chiroteuthis joubini and intergrades between this and form B2 may exist. Therefore the C. joubini complex may consist of a variety of species or one highly variable species that includes C. joubini, Chiroteuthis B2 and C. spoeli. We have examined variation in sucker dentition but not variation in other features and, therefore, cannot resolve the taxonomy at present.

Because of the uncertainties of the species boundaries of C. spoeli, a description of the holotype of this species can be found here.

The doratopsis paralarvae of C. spoeli are known from Hawaiian waters. In the doratopsis paralarvae of C. spoeli, the esophagus lies in a dorsal position within the brachial pillar. In other species, the esophagus is more commonly located in a central location within the brachial pillar (Young 1991). Maximum size of paralarvae is about 90 mm ML. The smallest subadult known is 65 mm ML indicating considerable variation in the size at "metamorphosis."

The vertical distribution of subadults of Chiroteuthis spoeli is known from a few squid captured off Hawaii. The three captures made during the day suggest a habitat between depths of 700 and 800 m. At night captures were scattered from the surface to 750 m with most from the upper 200 m. 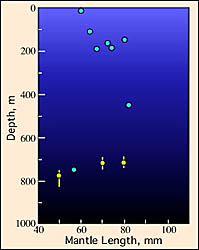 The species is known from the tropical and temperate Atlantic and tropical Pacific Oceans.