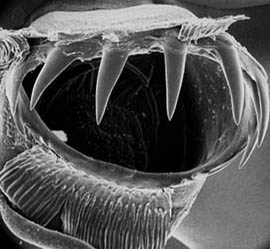 This is an incompletely known species.
Containing group: Chiroteuthidae

This squid is known only from a badly damaged brachial crown. The structure of the tentacular suckers is unusual and suggests that this squid is distinct from all present species unless they are the tentacular-club suckers of large Batoteuthis scolops which have not been described. The only known specimen was taken from Antarctic waters. We suspect that this damaged specimen belongs to an undescribed chiroteuthid.

The arm crown was badly stripped. Most protective membranes are missing and no indication of club divisions remains. The lack of an enlarged central tooth on the club sucker is similar to species in the Chiroteuthis joubini species group, but the slender nature of the teeth and their broad separation from one another is unique.