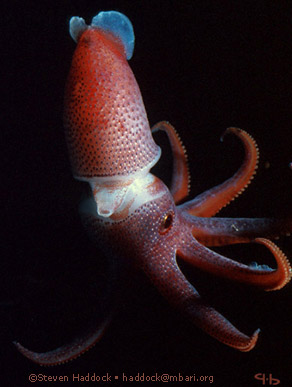 H. heteropsis is similar to its closest relative, H. meleagroteuthis, in the uniform, dense pattern of complex photophores on the head, arms IV and the mantle but lacks tubercules. This species is common off the coast of Southern California (USA) and has been observed from submersibles many times. It is lethargic in response to disturbance by an ROV; movements are slow and deliberate, even when jetting, inking is rarely observed (Hunt, 1966). The geographical distribution is unusual in that two separate populations exist one in the North Pacific and one in the South Pacific (antitropical distribution). It is found in temperate regions on the eastern side of the Pacific. Off southern California it occupies mesopelagic depths during the day and migrates vertically at night, presumably to feed. Maximum recorded size is 132 mm ML (Voss, et al., 1998).

Species of the meleagroteuthis-group are distinguished by the following characteristics:

H. heteropsis is easily separated from its closest relative, H. meleagroteuthis, by the absence of tubercles.

The holotype (by subsequent designation) is no longer extant. The single paratype, a female, exists at the California Academy of Sciences, San Francisco (Sweeney et al., 1988).

Males mature between 54-89 mm ML; size of maturity of females is unknown (Voss et al., 1998). Paralarvae (i.e., pre-photophore stage) have not been described.

These data from a vertical distribution study off Southern California shows that H. heteropsis migrates vertically from over 400 m during the day into the upper 400 m at night (Roper and Young, 1975.).

Type locality: Eastern North Pacific, off Santa Barbara Island. H. heteropsis is common in the California Current system between 24° and 45° N. It is also common in the Peru-Chile Current system between 30° and 36° S. In tropical waters it is generally replaced by its close relative, H. meleagroteuthis, although a single record (00° 38'S, 89° 29'W) is known from equatorial waters (Voss, et al., 1998).