This family has four genera, each with a single species.
Containing group: Oegopsida

No paralarva of any neoteuthid has been positively identified. However, a paralarva off Hawaii was tentatively identified to this genus by a process of elimination rather than the more reliable process of following a size series to identifiable juveniles. One of the keys to identification is the position of the digestive gland in an anterior postion adjacent to the cephalic cartilage. This feature is usually characteristic of families with buccal connectives that attach to the dorsal borders of arms IV. This paralarva had thick, iridescent tissue overlying the posterior part of the head but much of the skin was missing from other regions so the extent of iridescent tissue in an undamaged paralarva is unknown. Head and arm chromatophore patterns are incomplete due to damage. The dotted line indicates the size and position of the digestive gland. 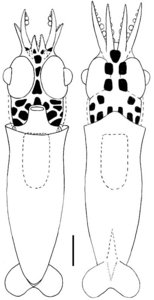 Page: Tree of Life Neoteuthidae Naef, 1921. Authored by Michael Vecchione and Richard E. Young. The TEXT of this page is licensed under the Creative Commons Attribution-NonCommercial License - Version 3.0. Note that images and other media featured on this page are each governed by their own license, and they may or may not be available for reuse. Click on an image or a media link to access the media data window, which provides the relevant licensing information. For the general terms and conditions of ToL material reuse and redistribution, please see the Tree of Life Copyright Policies.