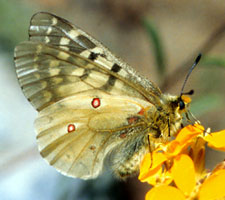 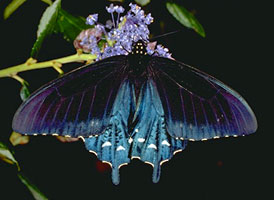 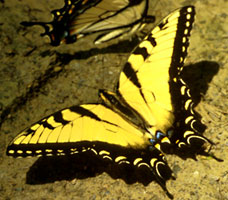 The swallowtail butterfly family, Papilionidae, consists of at least 550 species, many of which are large and colorful and recognizable even to non-specialists. While the majority of swallowtail species are found in tropical latitudes, representatives from the family can be found on every continent except Antarctica, and can be common in both tropical and temperate habitats. Swallowtail butterfly diversity is greatest in East and Southeast Asia, a region where many natural butterfly habitats are under extreme threat of destruction due to human activity. Some swallowtails, particularly representatives from the genus Parnassius, may fly at very high elevations. The birdwing butterflies (Troidini: Troides) of Australasia are the largest butterflies in the world. Collins and Morris (1985) provide an overview of the patterns of swallowtail diversity around the world.

The name "swallowtail" refers to a tail-like extension on the edge of the hindwing that is found in many, though not all, papilionids. The function of this tail is not known, but genetic studies in some species of Papilio suggest the tail is a labile character whose expression is controlled by a single gene (Clarke and Sheppard 1960, Clarke et al. 1968).

Within the Papilionidae, many families of larval hostplants are utilized, although five families generally dominate the host records: Aristolochiaceae, Annonaceae, Lauraceae, Apiaceae, and Rutaceae. Notably, the swallowtail tribes Zerynthiini and Troidini are limited almost exclusively to feeding on Aristolochiaceae. It has been demonstrated in a number of Aristolochia-feeders that caterpillars are able to sequester aristolochic acids, causing both the larval and adult stages to be unpalatable to predators (eg. von Euw et al. 1968).

Three unambiguous morphological characteristics unite all papilionids and distinguish them from the other butterfly families.

For several decades the favored view of Papilionidae has divided the family into four subfamilies: Baroniinae, Praepapilioninae, Parnassiinae, and Papilioninae (Munroe 1961, Hancock 1983), thought to be related (with constituent tribes) thusly:

Baroniinae and Praepapilioninae are both monotypic families that are considered to be primitive. The plesiomorphic nature of the sole member of the Baroniinae, Baronia brevicornis, has been supported by virtually all treatments. The sole member of Praepapilioninae, Praepapilio colorado, is an extinct butterfly that was described from a single fossil found in a middle Eocene deposit in Colorado, U.S.A. (Durden and Rose 1978). Praepapilio and Baronia share several striking similarities, but their exact relationship has been difficult to determine.

Baroniinae has traditionally been considered to be the sister group to the rest of the swallowtails, but recently several alternative hypotheses regarding the root of the swallowtail tree have been considered. In an analysis of 103 morphological characters from 59 butterfly and 19 moth species, de Jong et al. (1996) presented some evidence that the genus Parnassius may be the sister group to the rest of the swallowtails. However, the intra-papilionid relationships in de Jong et al.'s (1996) study changed dramatically when the composition of the outgroups was altered, and a local analysis with a butterfly-only outgroup provided the traditional Baronia-as-sister rooting. Furthermore, de Jong et al. (1996) included only six papilionid species in the analysis, leaving out many taxa bearing characteristics key to understanding papilionid relationships. Using a maximum-likelihood analysis of DNA sequence data, Caterino et al. (2001) found possible evidence for a root within the Papilioninae that would place Papilionini + Troidini as the sister group to the rest of the swallowtails. Because the likelihood of this intra-Papilioninae rooting was not found to be significantly higher than the traditional rooting, and because the traditional rooting is favored using maximum parsimony, we present the traditional rooting in our phylogeny.

With the exception of the intra-Papilioninae rooting alternative proposed by Caterino et al. (2001), the monophyly of the Papilioninae has been accepted by virtually every worker in the field. Despite this general consensus, the relationships of the tribes that comprise the subfamily have been debated. For our phylogeny, we follow the recommendation of Miller (1987) in recognizing Teinopalpini as the sister group to the Troidini + Papilionini group. At the time of this writing, no molecular data for Teinopalpini exist, and Miller (1987) provides the only rigorous phylogenetic analysis of the morphological data. The tribe Teinopalpini consists of only two species, both in the genus Teinopalpus. Munroe (1961) and Hancock (1983) did not grant Teinopalpini tribal status, but considered Teinopalpus to be a Graphiine genus (note that both authors used the name "Leptocircini" instead of "Graphiini").

Although a phylogenetic analysis of morphological characters (which was admittedly preliminary) has generally supported a monophyletic Parnassiinae (Miller 1987), several other studies on morphological (Hauser 1993, de Jong et al. 1996) and molecular (Yagi et al. 1999, Caterino et al. 2001) characters have called into question the monophyly of Parnassiinae. Our tree, reflecting the more recent trend in the literature, considers the Parnassiinae as a paraphyletic grouping of the two tribes Zerynthiini and Parnassiini. Interestingly, there were several earlier moves to split the Parnassiinae (Ford 1944, Talbot 1949).

Ford, E.B. 1944. Studies on the chemistry of pigments in the Lepidoptera, with reference to their bearing on systematics. 4. The classification of the Papilionidae. Trans. R. Entomol. Soc. London. 94: 201-223.

Igarashi, S. 1984. The classification of the Papilionidae mainly based on the morphology of their immature stages. Tyo to Ga 34: 41-96.

Correspondence regarding this page should be directed to Robert D. Reed at