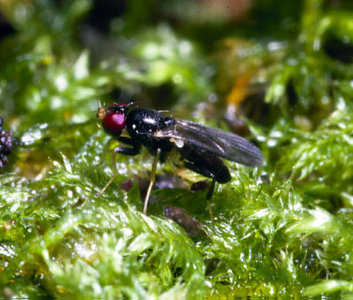 Craspedochaeta Czerny ("Czernyola" in publications from 1907-1971) is a relatively abundant genus in tropical regions, and is the only group of Acalyptrata that has four to five fronto-orbitals with the third bristle from the back inclinate and proclinate (the remainder are reclinate). The group is most diverse in the Oriental, Pacific and Neotropical Regions, but species also occur in the Australian, Afrotropical and (occasionally) Nearctic Regions (Lonsdale & Marshall in manuscript, McAlpine 1960, Sasakawa 1971).

Three species groups are currently recognized within the genus: the Craspedochaeta concinna (formerly C. atra), C. transversa and C. biseta groups (Lonsdale & Marshall in manuscript). The first two are found exclusively in the New World, and the latter is predominantly Old World in distribution, but one undescribed species is found in Bolivia and Ecuador.

Most species have been collected in tropical forests, but several species have extended their range into North America, and Craspedochaeta australis (McAlpine) has been collected at 3000' in a cool region known to get winter snow (McAlpine 1960). Some species frequent the undersides of leaves.

Craspedochaeta can be easily diagnosed by having four or five fronto-orbital bristles, all of which are reclinate excluding the third bristle from back, which is inclinate and proclinate. Other defining characters of the genus are male genitalic: the surstylus is smooth or sparsely setose on the outer face (at least anteriorly), the ejaculatory apodeme is wide and flared at one end (appearing 'mushroom-shaped'), and the hypandrial arm is only weakly attached to the remainder of the hypandrium (Lonsdale & Marshall in manuscript).

Species of Craspedochaeta also have two pairs of dorsocentral bristles (a small third dorsocentral is rarely present ), the mid and hind tibiae have dorsal preapical tibial bristles, the arista is pubescent to short plumose, and the phallus is usually large and sac-like, although some species have elongate sclerotized sections or the phallus is reduced to absent (Lonsdale & Marshall in manuscript). As in other Clusiodinae, the spermathecae are longitudinally segmented, and the hypandrial complex exhibits extensive reduction and fusion of components (Lonsdale & Marshall in press). Most Old World species exhibit a pronounced sexual dimorphism in size and colouration. 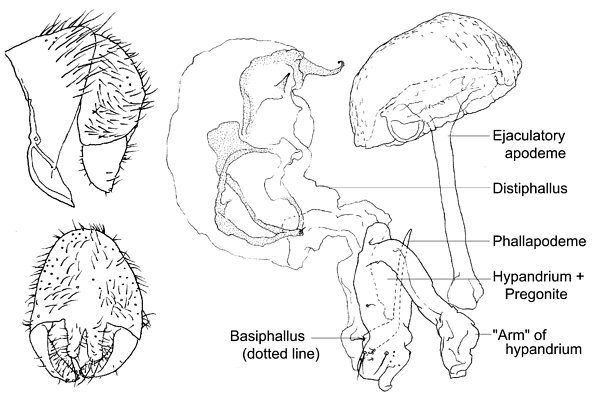 Excluding the basal Allometopon Kertesz and Electroclusiodes Hennig, Craspedochaeta is the sister group to the remaining clusiodine genera, which have spermathecae that are pigmented and strongly telescoped (Lonsdale & Marshall in press). McAlpine (1960) divided Craspedochaeta into the C. transversa, C. concinna, and C. biseta species groups, although the C. biseta group is defined by a single plesiomorphic character (a long anterior dorsocentral bristle) and is almost certainly paraphyletic. The Craspedochaeta concinna and C. transversa species groups form a single New World lineage characterized by wings that are entirely dusky (at least ancestrally; paralleled in several species of the C. biseta group) and an anterior dorsocentral bristle that is half the length of the posterior dorsocentral (Lonsdale & Marshall in manuscript).

The C. transversa species group is the most easily recognized, having an additional pair of reclinate fronto-orbital bristles at the anterior margin of the frons, and in most species, lighter bristles and paler notal colouration, united cerci that are often large and plate-like, an elongate basiphallus, atrophy of the distiphallus and the ejaculatory apodeme, and a long subterminal flagellum on the female ventral receptacle (Lonsdale & Marshall in manuscript). The C. concinna group is poorly defined, characterized solely by an absence of the prescutellar acrostichal bristles (independently developed in some species elsewhere in the genus); most males can be further characterized by surstyli that have almost no setae on the outer face (Lonsdale & Marshall in manuscript).

Members of the predominantly Old World Craspedochaeta biseta group, which is the largest of the three groups, are defined by an anterior dorsocentral that is 3/5 the length of the posterior dorsocentral. Most species in this group are characterized by a very small or setulae-like hind fronto-orbital bristle, but some species have this bristle ?-2/3 the length of the remaining fronto-orbitals. The group is predominantly Indoaustralian in distribution, although specimens have been collected in India and Africa (unpublished data), and a single neotropical species (Lonsdale & Marshall in manuscript) has been collected in Bolivia and Ecuador.

Lonsdale, O & Marshall, S.A. In press. Redefinition of the Clusiinae and Clusiodinae, description of the new subfamily Sobarocephalinae, revision of the genus Chaetoclusia and a description of Procerosoma gen. nov. (Diptera: Clusiidae). European Journal of Entomology.