This family contains the following four genera with 19 species.

These are mostly muscular squids of moderate size but are unusual in having the armature on the arms in four, rather than two, series (occasionally more than four series near the arm tips). The two medial series are usually hooks. Often the tentacular club has one very large centrally located hook. Species of the genus Gonatopsis are unusual in that the tentacles are lost in the early juvenile stage and remain lost through all older stages.

There have been several recent attempts to unravel the phylogeny of the Gonatidae. Nesis (1997) relied on similarity of morphology and, apparently, results of protein electrophoresis by Katugin (1993 and 1995) to derive the following relationships: 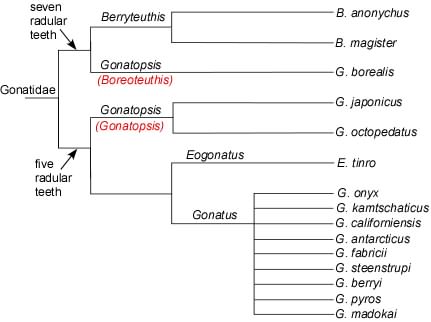 Figure. Phylogeny of the Gonatidae. Chart modified from Nesis (1997). Subgenera are in red. Nesis included only species that were well established as valid species. Nesis considered Eogonatus to be a subgenus of Gonatus.

Clearly if this phylogeny is correct then Gonatopsis is polyphyletic. More recently Katugin (2004) has reassessed the phylogeny of the gonatidae using electrophoretic analysis of allozymes. His results are seen below.

Recent molecular data analyzed using parsimony from 12S RNA, 16srRNA, COI genes (Lindgren, et al, 2004) offer a somewhat different phylogeny of the family but without good bootstrap support for most nodes. This data suggests that the Gonatus is paraphyletic. Gonatopsis borealis groups more closely with Berryteuthis than other species of Gonatopsis as suggested by both Nesis (1997) and Katugin (2004). 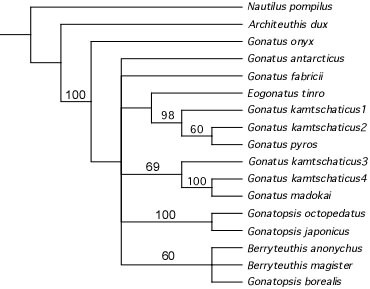 Because of the uncertainty in gonatid phylogeny, we retain here the standard classification for the family.

A list of all nominal genera and species in the Gonatidae can be found here. The list includes the current status and type species of all genera, and the current status, type repository and type locality of all species and all pertinent references.

Gonatids are pelagic squids that occur from the surface to over 1000 m depth. Some species undergo extensive diurnal (diel) vertical migrations, ascending at night and descending during the day. A few species are associated with the ocean floor over the continental slope. Gonatids occur in high latitudes of both hemispheres. One species lives in antarctic waters, two in the North Atlantic and 16 in the high North Pacific where they are among the most abundant oceanic squids.

Katugin, O. N. 1993. Study of relationships between different species of squid, family Gonatidae, by protein electrophoresis. In: Biology and Rational Use of Hydrobionts. Their role in ecosystems. Abstracts of communications of the TINRO Young Scientisit Conference, Vladivostok," p. 14-15. In Russian.

Katugin, O. N. 2004. Squids of the family Gonatidae from the North Pacific Ocean and their genetic differentiation: controversial issues in the systematics and phylogeny.Ruthenica 14(1): 73-87. In Russian with English abstract.