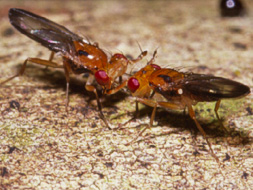 Hendelia Czerny is pantropical and south temperate in distribution with 42 described species (Lonsdale & Marshall in manuscript). It is the sister genus to the north temperate Clusiodes, with whom it shares a clear north/south division. Species are also known from throughout the tropical Neotropics, the Oriental, Australian and Pacific Regions, and the southeastern Palaearctic. A number of undescribed species are known from India, Sri Lanka, and the Afrotropical Region.

Caloren & Marshall (1998) recently described the behaviour, biology and faunistics of the New World Clusiodes and Hendelia, and Roh?cek (1995) described that of H. beckeri in the Czech and Slovak Republics. Adults of Clusiodes and Hendelia are found predominantly on hardwood, but several Clusiodes have been collected off of softwood trees such as pine, hemlock and fir (Caloren & Marshall 1998, Roh?cek 1995, Withers 1985). Species of both genera have been reared from puparia collected in numerous species of rotting deciduous tree trunks including alder, aspen, ash, beech, birch, elm, hornbeam, maple, poplar and tulip trees (Withers 1985, Greve & Midtgaard 1986, Roh?cek 1995, Caloren & Marshall 1998).

A number of Hendelia have strikingly modified heads, such as the pale and elongate head seen in H. beckeri males, the elongate antennae of H. extensicornis Frey, the strongly widened head and corkscrewed vibrissae of several Australian species, and the elongate genal processes of the neotropical H. mirabilis (Frey) and H. kinetrolikros (Caloren & Marshall) (Caloren & Marshall 1998, Marshall 2000, McAlpine 1976). Several of these species have been observed in male agonistic behavior at lek sites, usually on exposed tree trunks. Tuomikoski (1936) observed the pre-mating behaviour of H. beckeri, where males held their fore legs and "shivered" the fore tarsi when approaching females, using them as a perceptive feeler-like organ.

In addition to bare patches of wood, we have found that small dung baits attract adults of Clusiodes and Hendelia in the New World.

Species of Hendelia usually range from 3.0-5.3 mm (rarely less than 3.5 mm), but several Old World species range from 2.3-2.5 mm and are among the smallest clusiids. Like its sister-genus Clusiodes, Hendelia species have reduced anterior and posterior fronto-orbitals, interfrontal bristles, well developed median genal bristles, swollen spermathecal ducts, a large subapical disc on the ventral receptacle, a longitudinal desclerotization on the female seventh sternite, a crested fin-like phallapodeme, a distiphallus that is rod-like basally with a membranous distal section, and an elongate pregonite that is perpendicular to the long axis of the hypandrium (Lonsdale & Marshall in manuscript). 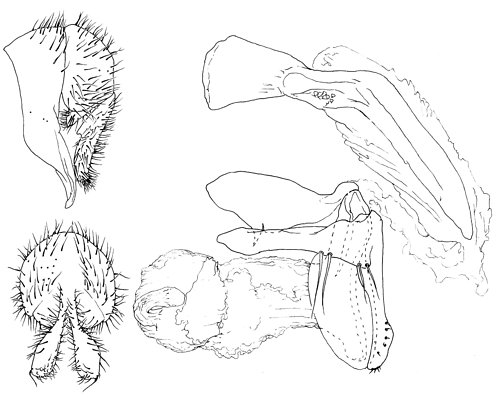 Hendelia is entirely defined by male genitalic characters (perianal area longer than wide; surstylus usually small, lobate and perpendicular to the long axis of the epandrium; ejaculatory apodeme widest apically), but it is most easily separated from Clusiodes by retained external synplesiomorphies: the arista is variably plumose or laterally compressed (never pubescent); if 3 fronto-orbital bristles are present, the anterior two pairs are usually closely spaced near the anterior margin of frons; the male fore and mid femora have one anterior and one to no posterior row of ventral ctenidial bristles (never two posterior rows); the scutum never has a white lateral stripe (Lonsdale & Marshall in manuscript).

Hendelia and Clusiodes form a natural group, supported by the synapomorphies listed above, and are monophyletic with Heteromeringia Czerny and Tranomeringia Sasakawa in the Clusiodinae based on telescoped and darkly pigmented spermathecae (Lonsdale & Marshall in manuscript).

The redefined Hendelia (Lonsdale & Marshall in manuscript) includes the six species originally published under that genus name and a number of taxa previously placed in other genera, including 31 species of Clusiodes Coquillett, all three species of Prohendelia Frey and the monotypic Xenoclusia Frey. Previous papers (Caloren & Marshall 1998, Marshall 2000) have included Labomyia Frey and Parahendelia McAlpine as junior synonyms. The confused taxonomic history of Hendelia is largely attributable to the use of the highly autapomorphic European type species H. beckeri as an exemplar for the genus.

Hendelia can be divided into a number of tentative species groups that will be revised in an upcoming paper (Lonsdale & Marshall, in manuscript).