This family has four genera, each with a single species.
Containing group: Oegopsida

The paralarva of any Neoteuthis species has not been positively identified. However, a paralarva off Hawaii was tentatively identified to this genus by a process of elimination rather than the more reliable process of following a size series to identifiable juveniles. One of the keys to identification is the position of the digestive gland in an anterior postion adjacent to the cephalic cartilage. This feature is usually characteristic of families with buccal connectives that attach to the dorsal borders of arms IV. 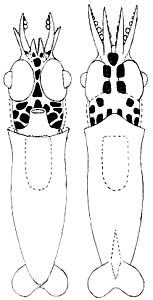