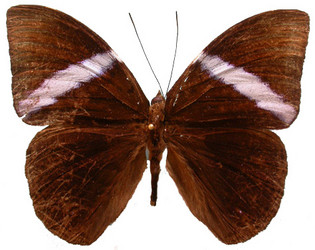 close box
The relationships of genera in Pseudergolini are based on the study by Wahlberg et al (2005).
Containing group: Nymphalidae

Pseudergolini is a small tribe of seven species occurring in Southeast Asia and the Malay Archipelago, and one more species in New Guinea.

The relationships of Pseudergolini have been enigmatic for a long time. Traditionally, they have been placed in the Limenitidinae, with one species (Amnosia decora) even being transfered to the tribe Nymphalini, and the genus Dichorragia being placed in Apaturinae. Molecular data have given a much clearer picture, supporting the hypothesis that Pseudergolini is a monophyletic group (Wahlberg et al. 2003, 2005). Pseudergolini clearly belongs to the nymphaline clade of Wahlberg et al. (2003), however the sister group is still not clear. Wahlberg et al. (2003) suggested that Cyrestini is the sister group, however, a larger sampling of taxa did not corroborate this (Wahlberg et al. 2005). The potential sister groups are Nymphalinae, Apaturinae, Biblidinae and Cyrestini.

The topology illustrated is that of Wahlberg et al. (2005), who sampled only one species per genus. However, species within genera are very similar to one another, and the genera differ significantly from each other morphologically. Thus the sister relationships of species within genera appear to be quite certain.

Page: Tree of Life Pseudergolini Doherty 1889. Authored by Niklas Wahlberg and Andrew V. Z. Brower. The TEXT of this page is licensed under the Creative Commons Attribution License - Version 3.0. Note that images and other media featured on this page are each governed by their own license, and they may or may not be available for reuse. Click on an image or a media link to access the media data window, which provides the relevant licensing information. For the general terms and conditions of ToL material reuse and redistribution, please see the Tree of Life Copyright Policies.