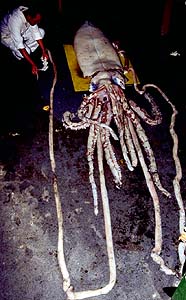 Twenty nominal species have been described in the family Architeuthididae (Clarke, 1966), but the systematics of the group is so poorly known that the actual number of valid species has long been uncertain. A morphological study (Försch, 1998), however, found no convincing evidence for more than one species. A recent molecular analysis (Winkelmann, et al., 2013) reached the same conclusion that probably only one species is valid.

Architeuthis dux is the largest (in terms of weight) known cephalopod, the largest known mollusks and probably the largest invertebrates ever known to exist in the oceans. Largest specimens attain mantle lengths up to 5 m and total lengths up to 18 m, but animals of that size are seldom reported. Most records are in the 6-12 m total length range. A. dux is characterized by having small, ovoid fins, very long arms, exceptionally long tentacles, and distinctive tentacular club structure. The only squid that approaches A. dux in size is the cranchiid Mesonychoteuthis hamiltoni.

Reviews are available of giant squid morphology, biology and distribution (Roper & Boss, 1982), occurrence and morphology in southern African waters (Roeleveld & Lipinski, 1991), systematics and biology in Newfoundland (Aldrich, 1992) and New Zealand (Försch, 1998) with a re-evaluation of species world-wide. The huge size of these animals and their (former) rarity, have engendered numerous myths and mysteries, both concerning their dimensions and their antagonistic, violent behavior towards ships, sailors and fishermen. Some of these accounts go back to the earliest natural history volumes published in the mid-1500s. The books by Lane (1960) and Ellis (1995, 1998) chronicle many of these stories.

Nesis, (1982/1987) and others consided that perhaps three valid species exist. But they are not well defined nor differentiated. These are A. dux Steenstrup, 1857 in the North Atlantic Ocean, A. martensi (Hilgendorf, 1880) in the North Pacific and A. sanctipauli (Verlain, 1877) in the Southern Ocean. The more recent data of Forsch (1998) and Winkelmann et al. (2013) indicate that only one species with a world-wide distribution exists.

Roper & Young (1972) suggested that Architeuthis is most closely related to the Neoteuthidae based on the similarities of the carpal cluster on the tentacular clubs and the absence of free anterior lobes on the fins. While the relationship does not appear to be close, it appears to be stronger than with any other family. For example, Architeuthidae belong in a presumed clade represented by the shared characters of a long, straight funnel-mantle locking apparatus and buccal connectives that attach to the dorsal borders of arms IV: Lycoteuthidae, Enoploteuthidae senso lato, Histioteuthidae, Psychroteuthidae and Neoteuthidae. But to suggest any reasonably close relationship among these families and Architeuthidae at this time is unwarranted. However, the closest relatives of Architeuthidae seem to be the small, deep-sea species of the Neoteuthidae.

Recent molecular data by Lindgren (2010) and Lindgren et al., (2012) strongly support the close relationship between Architeuthis and the Neoteuthidae.

Other Names for Architeuthis dux Steenstrup, 1857