The following 11 species are recognized in the genus. 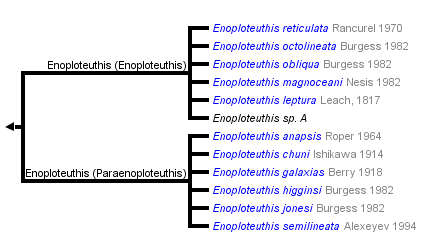 Enoploteuthis contains the largest species in the family one, at least, can reach 130 mm ML. The species are most easily recognized by their larger tail compared to members of other genera in the family. The size of the tail is emphasized by the absence of fins along its sides. This contrasts with the narrow extension of the fins along the tails of members of other genera.

Enoploteuthis has only two clearly defined types of integumental photophores in contrast to other enoploteuthid genera which have three types of photophores on the ventral surfaces of the head, funnel and mantle. The most complex type is found in all species examined and seems to be distinctive of the genus. 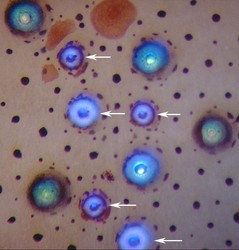 Figure. Integumental photophores of Enoploteuthis sp., Hawaiian waters. The arrows indicate "simple" photophores, of two sizes, with dark blue centers and a narrow white ring. The remaining five, slightly larger photophores are "complex" filtered photophores that exhibit three different physiological states. The central core in these shows varying degrees of transparency. The bright spot in the core of the most transparent photophore is a reflection off the axial color filter that lies buried in the center of the organ. The small dark spots and reddish patches are chromatophores. 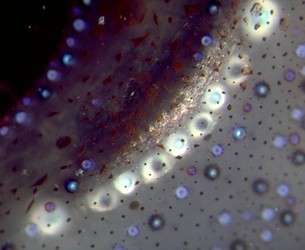 Figure. Ventral view of the ocular photophores (large white organs), beneath the smaller integumental photophores of Enoploteuthis sp, Hawaiian waters. The terminal ocular photophores are larger than the photophores between them. Photophores in the latter group alternate between having light and dark cores. The reason for this is unknown. 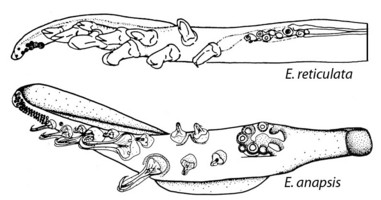 Burgess, L. A. 1982. Four new species of squid (Oegopsida: Enoploteuthis) from the Central Pacific and a description of adult Enoploteuthis reticulata. Fish. Bull. 80: 703-734.

Roper, C.F.E.1964. Enoploteuthis anapsis, a new species of enoploteuthid squid (Cephalopoda: Oegopsida) from the Atlantic Ocean. Bulletin of Marine Science of the Gulf and Caribbean, 14(1):140-148.