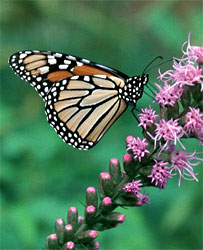 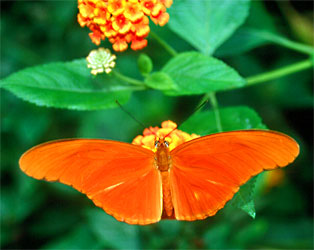 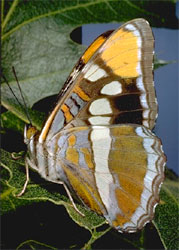 The pages under Nymphalidae on the Tree of Life Web site are being worked on at this moment. Relationships are shown for the most part down to the level of genera, but there is still very little other information on the pages. The pages will be continuously updated, so please check back often.

The family Nymphalidae is the most speciose family of butterflies with about 6000 described species so far. The family contains many well-known species, such as the monarch, the Painted Lady, the buckeye, the fritillaries, checkerspots and the electric blue morphos. Indeed, nymphalids are in many places the most visible members of the local butterfly fauna. Due to their visibility and ease of study in the field and lab, many species of nymphalids have been used as model systems to understand the complexity of life on this planet.

All species of Nymphalidae are united by a single morphological character, the tricarinate ridges found on the adult butterfly's antennae.

The diversity in form and life style has meant that the phylogenetic relationships of nymphalids have been contentious. This in turn has meant that there has been no consensus on the classification of the group, with some authors splitting the family into up to 9 different families! The lack of a good phylogenetic hypothesis has also meant that the evolutionary history of the group has been shrouded in mystery. Recent molecular and morphological work is bringing light to the question of how different species and groups of species are related to each other. The phylogeny shown above is the best estimate of subfamilial relationships based on as yet unpublished combined analyses of morphological and molecular data.

Brower, A. V. Z. 2000. Phylogenetic relationships among the Nymphalidae (Lepidoptera), inferred from partial sequences of the wingless gene. Proceedings of the Royal Society of London Series B Biological Sciences 267:1201-1211.

Correspondence regarding this page should be directed to Niklas Wahlberg at